Athena: traitor to her sex or image of female empowerment?

I have just, today, begun teaching a module using Athena as a vehicle for thinking about various aspects of the classical Greek world and its postclassical reception. In the first class this morning, I mentioned the existence of the various initiatives promoting women's inclusion and advancement in science, technology, mathematics and engineering which have used Athena as their symbol, the most recent of these being, I believe this one: Athena SWAN.

When I first started to hear about initiatives like this, I used to get frustrated, not because of its goals, which are wonderful - founded as they are on supporting and finding new opportunities for women and girls in the sciences - but because of the use of the image of Athena to exemplify what the project stands for: empowering women and girls, and finding space for women within traditional male fields.

What follows is founded partly upon a posting I made a few months ago for another blog I write, on who 'owns' classical myth - I'm updating this original posting is light of the discussion earlier today and because it is such a key example of how selective any reception of an ancient topic invariably becomes.

First - some observations on just how extensively the image of Athena has been used in such initiatives.

An Athena Forum was established in 2008 "to provide a strategic oversight of developments that seek to, or have proven to, advance the career progression and representation of women in science, technology, mathematics, and medicine (STEMM) in UK higher education. The Forum explores gaps and challenges, and identifies and commends national and international excellence in supporting women in science. It is the expert voice from within and for the science community." This forum is the successor of an earlier organisation, the Athena Project (1999-2007), set up - to quote from a summary in the journal of the Society for Experimental Biology for 2008 "to reverse the consistent loss of women employed in science, engineering and technology (SET) at each stage of academia and increase the representation of women in senior posts in higher education."

A report in the same journal for also reports on an event that explicity engaged with its ancient symbolas follows: "Wisdom, justice and skill in science, engineering and technology: Are the objectives of the Athena Project mythology?" "Mythology" is being used here, I think, in the standard modern sense of something one might like to believe in but which is false. However, the word also points to the ancient Greek mythological figure that the Athena Project is symbolically associating itself with. The three terms that start the quotation - wisdom, justice and skill - are among the salient traits associated with this ancient deity; indeed they are among the aspects that came up in today's class during an initial brainstorming session.

Before the Athena Forum was set up, there was a Project Athena, based in California to further educational opportunies for young women in mathematics and science. Another initiative, the Athena Project, was established in Washingston State to develop science, mathematics and technology in schools. The links I have for these initiatives have both expired - I last looked at them in, I think, 2000. I'll see what I can find out about them, not least because I'd be interested to find out who first decided upon Athena as a symbol for women in science.

Looked at from one angle, Athena is the obvious symbol for the various 'Athena projects' that have been created over recent decades. The goddess erupted suddenly from the head of the ultimate patriarch shouting and dancing, making her presence felt in the male-dominated world of the gods, and even surpassing the prevailing order with light that temporarily replaced that of the sun (see notably, Homeric Hymn 28: To Athena). After this birth that was described as causing awe among the watching deities, the goddess is seen to live up to her warrior appearance by operating in a male world in numerous ancient sources. The goddess is the advisor and protector (and even  the successor) of Zeus. The goddess is also, in various myths, represented as a friend of numerous heroes - Odysseus, Herakles, Perseus, Bellerophon, Jason and many more. In numerous ancient sources, Athena is envisaged as a female figure at home in, and thriving in, a male-centred enviroment. What is more, the goddess was regarded as the patron of human endeavor including in *techne* ('skill', 'art'). As Hygieia, the goddess was envisaged as a power of good health.  The ancient Athena not only breaks through the glass ceiling of the ancient mythological world; she also is a fitting symbol for those in science and medicine.

In other respects, Athena is the most inappropriate symbol for such projects that I can imagine. 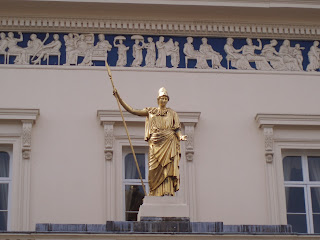 The ancient goddess is depicted in various sources as one who colludes in the suppression of women at male hands and who, even, actively intervenes to bring about the defeat of specific females. Moreover, in a sense, Athena symbolises the suppression of whole communities of women, not least those of her most celebrated ancient site of worship at its peak, the Athens in the fifth century BC. On this reading, Athena is the Mrs Thatcher of the ancient world - an exemplum of the woman who has broken through the glass ceiling only to use her status to ensure that no woman manages to break through after her. She is the anomalous female close to (at?) the heart of power who keeps herself an anomaly by refusing other women entrance, like the goddess on the front of the clubhouse of the Athenaeum (see image above), the London gentleman's club that excluded women from membership until recent years, and which was, according to its website, "established as a meeting place for men who enjoy the life of the mind" - that is the life of a male-oriented Athena.

From this perspective, there is irony in the appropration of a male-oriented female power by organisations set up to promote female education and achievement. This irony can be underscored by aspects of the mythology associated with the goddess, much of which involves not just promoting males as they go on quests or engage in battle, but also subduing other powerful or clever females. For instance, the sculpture of the western side of the exterior of the Parthenon juxtaposes Athena's arrival at Athens with the battle of Greeks (perhaps more specificially Athenians) and the Amazons, the warrior race of females who invaded Athens only, ultimately to be defeated and eventually wiped out at male hands. Furthermore, either by Athena's own hands, or through her proteges, notably Perseus, an array of females are defeated: Arachne, Medusa, Iodama and Pallas (her other self if not own self).

But it's far from the case that the receivers of Athena as a symbol for women in science, technology and other subjects are somehow using Athena wrongly. In acts of mythological reception, myths can be used by as/like metaphors - to convey a certain issue in a certain way, to stimulate new ways of thinking, and potenitally to change how the thing itself is conceived. Each time Athena is received, the goddess is being recast in a selective, incomplete, partial manner which involves cherry-picking those features that best suits the user. Rather than getting caught up in the question of how accurate or otherwise a particular instance of reception happens to be, the focus can shift to how the particular act of reception is adapting and appropriating earlier material to create a new meaning.

There might be a disjunction between what specific senders, such as Athena SWAN intend and how a particular receiver (myself for example) might respond to what they do. This is not because one of us is right and the other is wrong.  Each time Athena is adapted, a new image of the goddess is created which variously draws from, updates and transforms earlier interpretations.