Bright-Eyed Athena... and her fiery-eyed monster 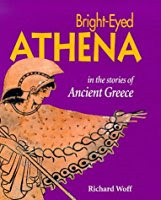 Over the next few months I'll be involved in a few Athena-related activities. These include teaching a final year undergraduate module on and around the goddess at Roehampton, preparing a case to a publisher for an Athena handbook, and writing an Athena-themed chapter for a book on classics and children's literature. For this book, a collection of academics, both in classics and children's literature, go Chasing Mythical Beasts. This book represents the next step in a journey begun in Warsaw in May 2016 at a conference on the same theme. At the conference, I took as my beast the Gorgon - the most 'other' of beasts, and whose bestiality operates in several ways - between animal and human, between beast and monster, and between different categories of animals as well, with its boar tusks and snake hairs. I also explored this beast's enemy, and alter ego: Athena. It was a paper on the 'fiery-eyed' monster; it was also about the 'Bright-Eyed' goddess, a deity with more monster associations than any other.

The paper focused on the book illustrated here - a book I saw and bought at the British Museum shop back in 1999 when it was not long out. When I met the author, Richard Woff, then a Head of Education at the Museum, a few years later, I was sad to learn that the book was likely not to stay in print. It is now out of print, but I hope that this situation will one day change. The book offers a gateway both into the richness and complexity of Greek mythology, with its varied deities, heroes and beasts. It introduces the reader to artefacts representing these figures, most of which are held in the British Museum. Indeed, one day I plan to make a tour of the Museum with this book as a guide. The chapter I am writing seeks to explore how this book presents the goddess and the monster - and how these figures are interwoven with various others. I shall also compare the Athena and Gorgon represented here with other uses of both in works for children. I shall also consider the place of Bright-Eyed Athena in relation to the other books for children - there are many! - authored by Richard Woff. And in order to seek to explain what makes the Gorgon so appealing - and what makes the monster-side of Athena so intriguing, I shall use the Monster Theory developed by Cohen to frame my study.

My plan is to chart my progress from notes from a conference paper to completed book chapter on this blog between now and the deadline which is just a few months away - in late December 2017.
Posted by Susan Deacy at 03:01