Receiving and changing the Gorgon... moving further towards a Bright-Eyed Athena chapter 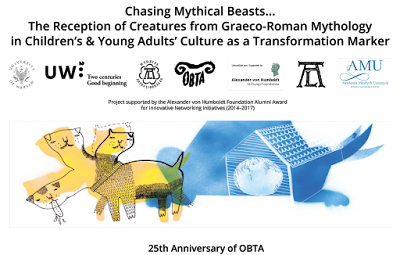 As I said in my previous posting of earlier this week, I'll be putting out blog postings between now and December to chart - and, well, enable - the progress from conference paper to book chapter of 'Bright-eyed Athena and her fiery-eyed monster.' The paper, which exists very much in note form at present, was delivered at a conference that formed part of the project illustrated to the left: Chasing Mythical Beasts... The Reception of Creatures from Graeco-Roman Mythology in Children's and Young Adults' Culture as a Transformation Marker. In this posting I'll make some initial comments about the conference and what my paper was seeking to achieve.

My paper was responding to the goal of the event as set out in the conference booklet, namely to explore how it is that creatures 'change' on being 'incorporated into the evolving youth culture.' So: my paper explored a particular moment in the evolution of a specific creature - and linked creatures - at a specific moment of youth culture. The paper looked at how Richard Woff's treatment of the Gorgon - like any reception - changes the Gorgon. But it also looked at how the book potentially resists making such a change. On the one hand, Woff retells - and so changes - the story of the Gorgon, weaving it in into other stories, held together by various threads - one of which is the 'Bright-Eyed Goddess.' On the other hand, the book seeks to set up a direct channel to the classical past via the illustrations in the book, of artefacts from ancient Greece, most of which are on show at the British Museum - to enable each visitor, young or otherwise, to form their own relationship with antiquity.

Thus the book is not just a creative reworking of classical mythology - it also introduces classical artefacts. In this regard it serves a comparable purpose to other books by Richard Woff - I'll discuss these in a subsequent posting - and it complements opportunities within the Museum itself to experience ancient artefacts. This is a museum that offers particular opportunities for children to make a journey through classical culture, including through hiring an ancient Greek backpack. On doing this, a young visitor can put on a peplos, search out selected artefacts located in various parts of the Museum and engage in a variety of activities appropriate to the artefacts in question - for instance by playing knucklebones in the Daily Life Gallery (Rm 69) beside a vase showing ancient Greek children at play. As the Museum's website puts it, children can: 'Dress up as an ancient Greek, try out children’s games, and sniff the bottles and guess the smell!' It's 'suitable for ages 5-9' but, accompanying a child a while back who fell within this age range, I found myself responding in fresh ways to the artefacts we encountered, and at the galleries in question, including the Parthenon Gallery, which I thought I knew pretty well.

I am going to break off for now - and in subsequent postings, I shall start teasing out the reception strands in the book - including how it retells stories of Gorgons et al and how it presents British Museum objects.
Posted by Susan Deacy at 02:59